Above is a comparison Video between a electrolysis test and a Plasma test.​ 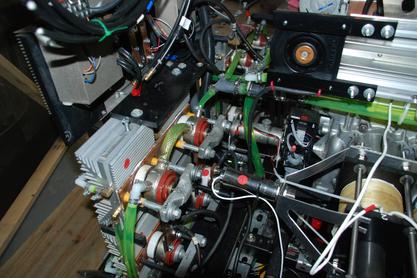 The original magnetic engine was created for automotive applications.  With two US patents approved for magnetically powered reciprocating engine and electromagnet control systems.  The testing has consistently generated more power output than its input, making it highly efficient.  Our technological advancements led to the findings that in a solid state, with no moving parts, far more power "Out" than "In" is generated and also a cooling of the magnets and core is created.  This resulted in a third Patent approved in 2014 for the production of magnetic energy using no moving parts.  Upon reviewing the results, we took our technology to a third party for testing to see if their lab captured what our lab was producing.  We turned our attention to the University of Alabama and Dr. Timothy Haskew who is the professor and head of Electro-mechanical Systems Lab at the University of Alabama. 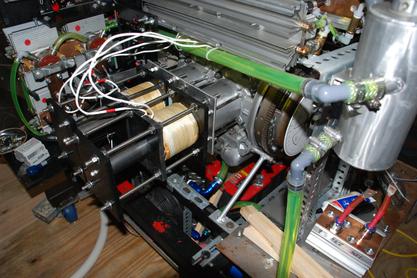 Upon finding that we could generate increased energy output, we turned our attention to capturing the new energy source.  Our method for capturing the energy focuses on producing conditions that create magnons that convert ambient heat into massive amounts of electrical power.  In a magnetic substance such as iron, each atom acts as an individual magnet. These atomic magnets, when in equilibrium, point in the same direction so their magnetic fields reinforce each other. When the direction is reversed, the strength of the group is decreased and that decrease in magnetic strength of a group of atoms constitutes a magnon.  The reversal of a single atomic magnet is equivalent to a partial reversal of all the atomic magnets in a group.  The partial reversal spreads through the solid as a wave of energy transferal called a spin wave because the magnetism of each atom is produced by the spin of unpaired electrons in its structure.  A Magnon collision also creates a cooling of the cores and electromagnetic coils.  The Magnetic Miles technology controls the flow of magnon waves into magnetic field to align their direction and magnitude. The magnon waves carrying the heat energy are collided and annihilated resulting in the production of a highly concentrated and directional electromagnetic field. This electromagnetic field is converted into large, useful amounts of electrical and magnetic power.

THE EVOLUTION OF OUR PATENTED MM1 TECHNOLOGY

The Power of Believing

As a result, the pistons are repelled from the precision magnetic fields in a manner that optimizes mechanical efficiency and creates minimal heat.The MM1 optimizes the use of electromagnetic fields and eliminates most electrical and mechanical losses normally associated with traditional electric motors. The material, geometry and electrical pulse characteristics employed within the MM1 allow collapsing magnetic fields to be recaptured and instantly stored as useful electrical energy; making each stroke of the piston partially regenerative. Parasitic drag normally created by eddy currents and the mechanical resistance normally created by the effects of Lenz’s law in electromagnetic motors are significantly reduced in the MM1. This is a result of highly advanced materials, specific coil and cylinder designs and a combination of precision controls over electromagnetic waveforms delivered by and recaptured from the coils located at the topside of the cylinder. The MM1 electromagnetic reciprocating engine could be the world’s quietest motor. It can operate near silence with barely measurable levels of vibration making it excellent for military and law enforcement applications. In addition to superior efficiency, low noise and low heat emissions, the MM1 can operate efficiently at a broad range of speeds. Unlike conventional electric motors that turn at high RPMs to achieve proper efficiency and torque characteristics, the MM1 can operate at peak efficiency through a broad RPM range; in many cases eliminating the need for a transmission or gear reduction assembly. In addition the MM1 can electronically reverse its rotating direction eliminating the need for reversing gears. For further information and details please refer to our contact page and get directly in touch with us.

The revolutionary MM technology is set to transform a myriad of applications from conventionally generated energy to magnetically generated power. Our present prototype and sample representation of our patented technologies is the MM1 engine. The MM1 is an electromagnetically driven reciprocating engine. It converts electrical energy to mechanical energy by combining multiple highly advanced technologies that allow it to achieve efficiency that meets or exceeds the capacity of any presently available electric drive system in a stealthy, almost heatless and clean manner.

The MM1 prototype is used as the visual example and proof of concept for all underlying Magnetic Miles technologies. In the present configuration the Magnetic Miles MM1 motor utilizes permanent magnet pistons that transfer linear motion to rotational motion via a traditional crankshaft assembly. The magnetic pistons reciprocate in the presence of digitally controlled electromagnetic fields generated by stationary coils located in each cylinder. Based upon the position of each piston, each magnetic coil is sequentially activated by a series of electrical pulses that are continuously controlled, directed and optimized to convert electromagnetic energy to mechanical energy via the repulsion of the magnetic pistons. Many advanced proprietary materials and processes allow the electrical pulses and resulting magnetic fields to be shaped, controlled and manipulated with un-paralleled levels of precision.